New vegans are often criticised for not adhering to principles which have nothing to do with being vegan. One of the most hotly contended issues is whether palm oil is vegan.

Palm Oil Is Vegan – It Comes From Palm Fruit

Being vegan means not eating, wearing, or using animal products. According to these criteria, palm oil is vegan as it is derived from the palm fruit.

The Truth About Palm Oil Production

So why is everyone up in arms about palm oil?

Why do some people specifically say palm oil is not vegan?

Is There Ethical Palm Oil?

There are good and bad production methods in the palm oil industry just as there are in every other industry. For example harvesting cocoa, coffee, soya, quinoa and even wheat results in the the death of animal life, environmental devastation and/or human rights violations. Let us not write off every single product that contains palm oil.

On a positive note, ethical companies are taking steps to address the issues surrounding palm oil production. One example is the highly reputable vegan firm VBites Foods, previously known as Redwood Wholefood Company. Due to public pressure, they have committed to removing all palm oil from their products over time. In the meantime, this is their current palm oil policy:

– VBites Foods only buys palm oil from reputable sources in Indonesia to avoid causing any further damage to people or the environment.
– All palm oil is purchased from sustainable sources.
– VBites Foods works closely with its suppliers to make sure that all of our principles are upheld at all times.
— VBites Foods ‘Palm Oil Policy’

This is the response we received from Bute Island Foods:

“Our palm oil suppliers are the leaders in developing sustainable palm and are one of the founding members of the ‘Roundtable on Sustainable Palm Oil’ (RSPO). Having said that, we would prefer not use palm and wherever possible we have switched to coconut oil and will be continuing to look to develop/re-formulate palm oil free, hard Sheese alternatives.”
— Bute Island Foods

Another example comes from a non-vegan producer of plant-based milks:

“WhiteWave is proud to source palm oil from suppliers that adhere to the RSPO principles, which ensure the rainforest and its inhabitants are protected and that workers are treated fairly and receive fair wages.” — Ron Schnur, WhiteWave Foods

Veganism Is Our First Priority

The palm oil debate is fraught with intrigue and drama, and it will take a while before a truly ethical strategy is formulated for the way forward.

The important point here is: whether you are personally motivated to get involved in the struggle, and whether or not you choose to consume palm oil is up to you. The choices you make in this regard will not alter your vegan status.

On the other hand, spreading the misinformation that palm oil is ‘not’ vegan only serves to dilute the vegan message and ultimately hurts more animals than it could ever save.

Take a moment to look at the bigger picture: the 2011 Defra mapping exercise of UK figures shows that 552,300 mt (80%) palm kernel meal and 150,000 mt (23%) palm oil is used for animal feed, as opposed to 435,000 mt palm oil which is used for human consumption. These figures show very clearly that the consumption of animal products is a major driver of the industry. Promoting veganism will effectively reduce the devastation caused by palm oil production as it will squash the demand for palm oil derivatives in animal feed.

Do you truly want to give orangutans a hand? Then help us raise the status of all animals to legal persons. Until people no longer eat animals, they will never see orangutans as anything more than disposable resources. 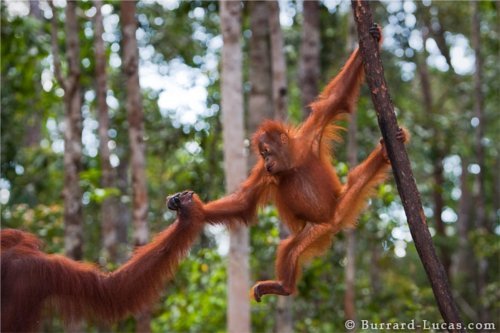 Let’s work together to make veganism the moral baseline and majority mindset. To do this we need to encourage mainstream veganism. Let’s put aside our personal agendas and make shifting the paradigm towards a vegan world, our first priority.

Do you have more questions about transitioning towards veganism?
Get in touch with us today!